(CNN January 3, 2021) The pandemic has popularized a lot of unexpected activities. Remember when everyone was doing puzzles and baking bread? Thanks to social distancing, the sport of golf has seen a resurgence, too.
At the beginning of 2020, golf courses were seeing business as usual. There was no big nationwide increase in the number of rounds of golf played, according to data from Golf Datatech. There was no indication that this would be the biggest year yet for the recreational sport. But when everything came to a standstill because of the pandemic, things changed. When states started reopening in late April and May, sprawling, socially distanced golf courses were one of the first “safe” spaces that were able to get back to business. Interest in the sport quickly followed.
In May, the number of reported rounds of golf in the US — defined by Golf Datatech as a single authorized “start” at a self-reporting club or facility — rebounded from a 42.2% decline during lockdowns to a 6.2% increase over last year.
Then, rounds began to surge. Since June there have been over 50 million incremental rounds of gold played, according to the National Golf Foundation. October’s year-over-year numbers are the greatest yet adding just over 11 million additional rounds for the month than in 2019.
In fact, the NGF reports there’s only been one other year that saw a bigger rise in interest in the sport: 1997, the year Tiger Woods became a massive sensation. 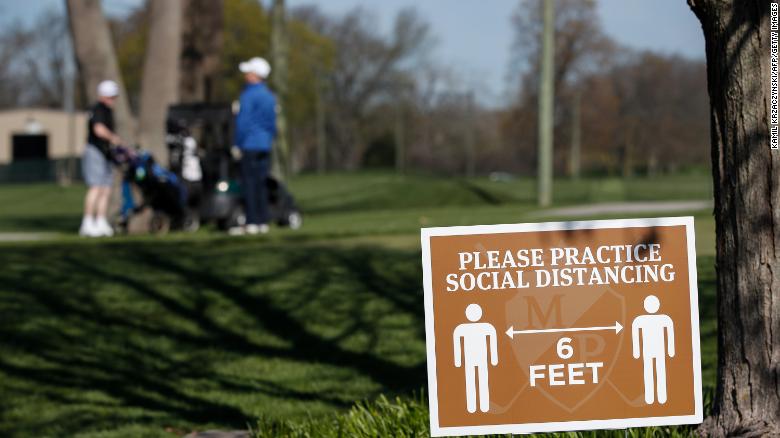 A sign informs golfers to practice social distancing at the Mt. Prospect Golf Club in Mt. Prospect, Illinois.
Equipment sales are surging
But rounds played is not the only indicator of growth in the golf industry. Equipment sales also surge. The industry hit an all time high of $388.6 million in sales in July, according to Golf Datatech. “It’s amazing to see the growth the sport has experienced — even in the face of a global pandemic. The fact that people can play safely, get outdoors, social distance, etc. is certainly positive.
Although retail has experienced an uphill battle this year, we’ve seen tremendous demand in our online channels,” Adidas Golf President Jeff Lienhart told the NGF.
Mike Jakob, CEO of Swing King, a tech company that sets up automatic hole-in-one contests at golf courses, said his company saw sales increases of 20% to 50% for some regions and an overall market growth of 50% to 300%.
July and August saw the two best months for golf sales since Golf Datatech started recording equipment data in 1997. “We have never seen a surge like what has happened in the summer of 2020, coming out of the worldwide shutdown from COVID-19,” said John Krzynowek, Partner, Golf Datatech in a news release.
“The August sales record, which followed an all-time record month in July, is great news for the industry moving forward. It indicates how popular golf is today, especially as an ideal social distancing activity.
Newcomers are coming into the game, existing golfers are playing much more, and those who once played but left for a while are returning, which is the perfect combination to drive rounds played and spike equipment sales at retail.” 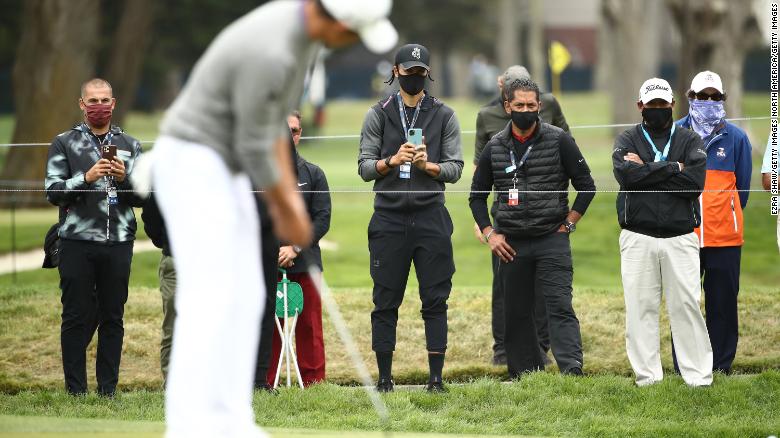 NBA athlete Stephen Curry of the Golden State Warriors takes a photo as Collin Morikawa of the United States putts on the seventh green during the final round of the 2020 PGA Championship.

Viewership is some of the best in years

In addition to actual play, 2020 also saw a big boost in golf viewing.
In August, ESPN announced that the ratings for the 2020 PGA Championship were the best they had been in five years. The first round of the tournament averaged 1,246,000 viewers, making it the event’s most viewed first round telecast since 2015, and the second best opening round in the last 10 years. The second day of broadcast, viewership rose another 42%.
Even ESPN’s College Gameday broadcast from the Masters for the first time ever, and gained a 31% increase in viewership from all of its other shows in 2020, according to ESPN’s Bill Hofmeier. If one had to pinpoint the moment the current golf renaissance truly began, they might look to early May, when golf greats Tiger Woods and Phil Mickelson teamed up with NFL greats Peyton Manning and Tom Brady for “The Match II,” a special charity golf event at at Shadow Creek Golf Course in Las Vegas. (The original “Match,” between Woods and Mickelson, was held in 2018.)
For many people, it was the first live sports event they had seen in months, and it showed. “The Match II” automatically became a major topic of discussion online and in living rooms across the country. Content related to the event trended on Twitter all day as people bonded over a moment of familiarity in an increasingly unfamiliar and tragic age.  The numbers just drove home the win. All in all, “The Match” brought in an average of 5.8 million TV viewers — the most-viewed golf event ever.